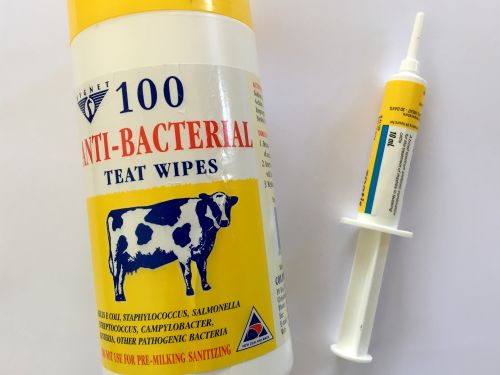 We regularly find that our milking time and farm visits are quite illuminating.

Not only do they allow us to demonstrate and reinforce procedures that have been discussed both at training courses and on the farm, they also allow us to see firsthand what is actually happening on the farm and in the dairy.

Sometimes things aren’t what you think they are going to be, and I was reminded of this at a recent milking time visit.

It was quite early during the milking when a “bucket” cow came around on the platform.

This was a cow with a clinical case of mastitis, and she was obviously still undergoing treatment, because as the cow reached the cups off operator, the platform stopped and the treatment procedure began.

Much to my surprise, there was no disinfection of the teat end prior to insertion of the intramammary tube of antibiotic!

After cups off, the tube was just inserted into the teat orifice and the contents infused into the quarter. This was followed by a very quick massage of the teat, a squirt of teat spray and then the platform was under way again.

It had only been a couple of months earlier that we had done a complete dry-off strategy discussion at this farm with both management and staff.

As always, we had stepped through and then demonstrated the actual treatment procedure, in order to achieve as close as possible to best practice.

Also, as part of that discussion, we had iterated how the procedure was really no different to that which should be used for treating clinical cases of mastitis during lactation.

After that batch of drying-off had concluded, we had reviewed the process. Everybody had been very happy with the system used, and the application of the correct protocols at the time of dry-off treatment had gone well.

Our assumption was that the treatment protocol had also been translated across to the treatment of clinical cases during lactation.

But here was the evidence right in front of us suggesting that this was not so!

Our first suspicions were then confirmed when another “bucket” cow came around for treatment. The lack of teat end disinfection was repeated, so clearly this was actually standard procedure.

Whilst it was a complete surprise in this dairy, overall this is not an uncommon finding.

Another reasonably common procedure we see is the use of teat disinfectant spray alone, without any physical cleaning, as a method of disinfecting the teat end prior to treatment.

Quite simply, neither of these is best practice.

Whenever a syringe is introduced into the teat orifice, there is a risk of introducing bacteria and/or dirt and faeces from the surface of the teat.

Given that quite commonly the antibiotics we use to treat mastitis are not ideal for the types of environmental infections we introduce as a result of poor teat end disinfection, this may significantly affect cure rates.

Best practice is defined for us in the Countdown 2020 Farm Guidelines for Mastitis Control, published by Dairy Australia.

“Completely disinfect the end of the teats to be treated. This step is critical.

The recommendation for scrubbing as opposed to just spraying is to ensure all contaminating material is removed from the area around the teat orifice - continue scrubbing until no more dirt comes off.

Clearly, this best practice applies to all intramammary treatments, both at drying-off and during lactation.

Our assumption that the treatment protocols outlined and adhered to for drying-off were also being used in the treatment of clinical cases of mastitis was wrong.

It has meant that we have reviewed our protocol for discussion and training of these issues on farm to ensure that these procedures for best practice are now clearly laid out.

But we know this is not an isolated case - do you need to review the protocol on your farm?