Trouble, but what sort of trouble? 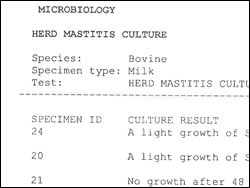 Paul milks about 600 cows through a large herringbone dairy in Northern Victoria.

The farm’s Bulk Milk Cell Count (BMCC) and number of clinical cases of mastitis had been climbing steadily throughout the wet winter and spring, and it was failing to respond to everything the farm team had tried.

In our initial discussion with Paul, one sentence described the level of frustration and exhaustion for everyone on the farm – “We have hit the wall!!!”

We decided to begin by having a meeting with Paul and key management staff around the kitchen table over a cup of coffee, just to get a handle on where everything was at for the farm and the people on it.

The wet winter had been especially difficult – like many farms in the region, part of the farm had been laser levelled and re-sown in the autumn and thus was simply unavailable for the cows during the wet. The remaining areas had become extremely muddy, and so had the lanes.

This meant that milking had been an enormous chore as copious amounts of mud had to be washed from teats at virtually every milking. As a result, both management and milking staff were exhausted and frustrated, and everyone was pleased to think that it looked like they had just seen the end of a long, wet winter.

But while the weather seemed to have turned the corner, the BMCC and clinical mastitis had not – what could be causing this amount of trouble?

As always, we suggested milk cultures as being vitally important in order to fully understand what is happening.

“It’s environmental!” was the cry from nearly everyone around the table.

“Our cultures have always been Strep uberis!” was another comment.

However, the farm had actually already taken a small number of cultures, and whilst there were indeed some environmental mastitis bacteria present, there were also a few Staph aureus cultures.

It was difficult to meaningfully interpret this number of cultures. Also, all of these cultures were from clinical cases, but the main presenting problem was the high Bulk Milk Cell Count.

So the farm continued to collect samples from clinical cases and a herd test was organised for later in the week.

From the herd test results, about 30 cows with a range of higher cell counts and ages were selected to sample and composite milk cultures were taken from all four quarters of these cows.

When these results returned in a few days, the picture became very clear, but it was a very different picture to the assumptions around the coffee table.

The farm team had done a great job of hygienically collecting samples – out of 27 cows sampled, only 3 samples were contaminated, and there were only 5 “No Growth” results.

Of the remaining 19 cows which had a positive culture result, 15 were Staph aureus, with only one Strep uberis!

Staph aureus is a cow associated (or contagious) mastitis bacteria, meaning that none of the Staph infections were sourced from the environment and all the spread of Staph infections was occurring in the dairy during the milking process.

This was now a very different picture to the initial assumption that the problem was environmental due to the wet weather and extremely muddy conditions on the farm.

So, where to now for this herd?

Knowing the main source of infection and where spread of infection is occurring gives us a clear roadmap of where we need to go from here.

We will need to have a close look at the milking process to see what changes are necessary. Milking is a process where cows, machines and people all come together – what will be the key actions needed to control the spread of infection in this dairy?

Will we need to split the herd to reduce the risk of spread?

Then as we progress, we will need to monitor herd test results to assess ongoing spread of infection and review our strategy.

We will need to develop a preferential culling list of persistently infected cows, plus develop a dry-off strategy to deal with as many of the remaining infections as possible.

And we must always remember that Staph aureus is not the only cause of mastitis on Paul’s farm.

So we will continue to strategically take milk cultures to ensure we are still focussing on the right things!!!