Surveys of mastitis are relatively rare in Australia, so the opportunity to do a major survey across a number of farms and regions for a whole year is something not to be missed.

Earlier this year Dairy Focus completed a major mastitis survey that offers a unique insight into mastitis in the Australian dairy industry.

The survey will have significant benefits for the industry as a whole, as well as for individual farms.

Instigated and funded by Pfizer Animal Health, the survey included 66 farms across South Eastern Australia and resulted in over 4000 milk samples from both clinical cases of mastitis, and subclinical mastitis cows, being sent for culture and sensitivity over a twelve month period.

All the participating herds were enrolled in herd testing, so cow information such as age and stage of lactation could be incorporated into the analysis, giving greater power to the survey and its results.

Analysis is ongoing, but some key findings were presented to the Countdown Mastitis Symposium held in Melbourne during July.

Of the samples which produced a positive result, 54% of samples were Strep uberis, 15% Staph aureus, 12% E. coli and 9% were Strep dysgalactiae.

This means that overall, these “big four” bacteria made up nearly 90% of all positive results, with Strep uberis being responsible for more than half of them. 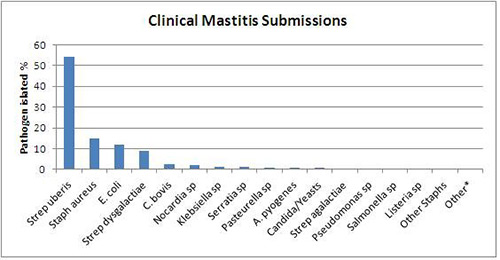 These results demonstrate why it is necessary to take a meaningful number of samples, and why just one or two samples are unlikely to accurately define the situation on a farm - when submitting milk samples from clinical cases for culture, we need to factor in that about 40% of samples may well fail to produce a positive result.

This will also assist advisers and farmers to communicate more meaningfully about the interpretation of culture results, and to be able to identify when collection techniques on farm may be an issue needing attention.

Clearly, as an industry we need to target our activities towards the "big four" mastitis bacteria, especially Strep uberis (Countdown Downunder/Dairy Australia has recently produced a Technote on dealing with Strep uberis).

"Common things happen commonly",  so when reviewing culture results we should look critically at situations where the results don't reflect the typical pattern shown above, and we should be aware that Strep uberis is likely to be at least part of the story in most situations.

Next time we will look at the results from the subclinical cows - to follow the discussion about the survey and its results, make sure you subscribe to our e-newsletter.

To view an edited version of the full presentation given at the Countdown Symposium, click here.