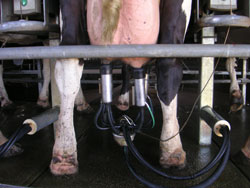 She was the wild one as a calf. Then as a heifer she had a “spooky” look in her eye and she was always the one who went the wrong way when trying to get a mob through a gate.

After having calved she caused our sharemilker some grief trying to break her in, so it was no surprise that when it was my turn to milk at the weekend, he warned me to “be a bit careful” with her.

Both Saturday milkings had been uneventful, so maybe my guard was down, but on a cold frosty Sunday morning, she got me with a well-timed and savage kick, flush on my frozen fingers.

As tears welled up in my eyes, I muttered “That’s it, you’re gone!”, but probably using a lot more colourful language and at high volume!

After milking, I duly booked the truck for the next day, so on Monday morning she left the farm forever, and was marked in our herd records as “Sold – temperament”.

As we now approach dry-off for the spring calving cows, culling often becomes part of the dry-off discussion; after all, there is no point in spending money to treat cows that will be culled.

There are many different factors that go into considering which cows are to be culled - mastitis control is only one of those factors.

Sometimes the decisions are carefully considered and sometimes they can be quite spontaneous. (That is when I always remember 2036!)

In terms of mastitis, culling can mean different things to different farms and even to different cows. It is possible to cull a cow, cull a quarter (by making her a 3-teater), or cull a cow from the normal milking routine to reduce the risk of spread.

Both clinical cases of mastitis and sub-clinically infected cows represent a significant risk of spreading infection to other cows in the herd, and the longer they stay in the herd, the greater the risk.

Obviously, not all cows will respond to mastitis treatments, but treatment at dry-off is definitely the best chance of curing sub-clinical infections.

Persistently infected cows are cows that have had subclinical infections (as demonstrated by high individual cow cell counts) across consecutive lactations despite being treated at the intervening dry-off with antibiotic dry cow therapy.

So the following are some of the thoughts we use in contributing to the discussion about culling for mastitis control.

1. Number of clinical cases in this lactation?

Countdown recommends that cows with 3 or more clinical cases of mastitis during the current lactation should be considered for preferential culling – this is the “three strikes and you’re out” concept.

2. What is the cow’s previous clinical mastitis history?

Did she have clinical cases last season? If so, how many?

Have the cow’s previous clinical cases resolved quickly and easily, or have they been difficult to treat?

Have cases recurred within 14 days (which suggests they weren’t cured originally)?

3. What is the likelihood of treatment at dry-off being effective?

Are there relatively recent milk culture results available to understand the likely type of infections in the herd - you should never just assume that the current infections are the same as they have always been.

Some infections are likely to have significantly lower cure rates - your vet will interpret milk culture results for you in terms of likely cure rates at dry-off.

Was she treated with antibiotic dry cow therapy at the end of the previous lactation?

Is she a persistently infected cow? (If so, chances of a successful treatment are probably low.)

4. What is her current stage of lactation, pregnancy status, and production level?

Cows that are not pregnant, in late lactation, and low producers could be considered for immediately culling.

Cows that are pregnant, in late lactation and not producing well could be considered for early dry-off.

Treatment cure rates have been shown to be lower for older cows with chronic infections, whilst young cows have a better chance of success.

Cows with high genetic merit, favourite cows, etc. may all be considered worth another chance, but cows with low genetic merit, poor conformation, and/or poor behaviour will generally be culled earlier!

This is obviously not a complete and exhaustive list of factors to consider when considering culling, but they are common points of discussion that arise for us.

And whilst each of these points could individually determine a cow’s future, generally they are all considered together to make those decisions.

Obviously cows that transgress on more than one of these points will have a higher ranking on the preferential “cull list”, because treating a cow with a low chance of success, or a cow with a short future is likely to be counter-productive and frustrating.

Herd records, herd test results and a Countdown Mastitis Focus Report are all likely to be highly useful aids to interpret the records and make decisions.

And at the end of the day, considered decisions are likely to be the best decisions – perhaps I should have given 2036 another chance…….