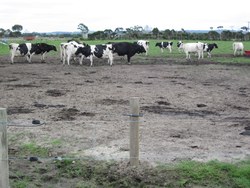 It really shouldn’t have been this dry - after all, it was the last week in June and it was Gippsland!

In fact, the only problem we had as we walked across the designated calving paddock on that day was the icy wind which was intent on going through anything in its path rather than around it!

The paddock was a great choice for calving - it was close to the house as well as to the dairy yards and facilities, plus it was well drained, with a clean pick of pasture.

We had just spent an hour discussing the strategy for calving this spring, as mastitis at calving had been an issue in the last few years - well above the Countdown trigger point of 5 clinical cases per 100 cows in the first 14 days after calving.

Naturally we had previously reviewed the dry-off strategy, and all cows had been dried off with the updated protocols and procedures, and now the time had come to review the actual calving strategy.

In particular, we were discussing the management of this calving area as the first 100 springing cows were due in there in a couple of weeks.

Surely, if it stayed this dry, problems would be minimal, and the area would cope with the whole spring calving, wouldn’t it?

Well, no, probably not! Why not?

Environmental mastitis bacteria will readily contaminate teats if udders are exposed to mud and manure.

If a typical cow defaecates about 7 times a day, then there will be 700 new manure pats in that area each day the first 100 cows are in there. That number is cumulative if the cows stay in the same area, and/or new cows come into that area replacing cows that have calved.

Given that Countdown advises that “if more than two pats of manure are present per square metre, it is not clean enough for calving cows”, obviously it won’t be too long before parts of that area will exceed this trigger point!

However, our walk had revealed that the location of the water trough would make managing this area in sections an absolute breeze. Cows could easily be moved on to the next fresh section when the current section became too contaminated and they would still have ready access to water.

A quick “back of the envelope” calculation suggested that this area plus the neighbouring paddock would likely cover off most, if not all of the spring calving.

So, that’s it, all done with the calving area?

If it comes in wet, if the main areas become too dirty, or if a problem arises, then “Plan B” will be essential, and it would be much better to plan for it now and be ready.

A short walk further on revealed another area that could easily be held in reserve, and it was only a little further away from the yards and facilities.

When to call on Plan B?

Countdown recommends that if three or more clinical cases of mastitis have occurred in the last 50 calvings, you should move the springers to a new area.

If you are calving 50 cows in a week, and the time interval in question is the first 14 days after a cow calves, then three cases in 7 - 10 days would suggest that you take a closer look, do the arithmetic properly, and move the springers to a fresh area if necessary.

Watch the calving area closely and if it approaches two manure pats per square metre, consider moving the cows.

If the gateway, the lane, or any regularly used section of the area or access point become heavily contaminated, or turn into a bog hole, then it is time to move to Plan B, so that freshly calved cows don’t have to traverse those areas.

In summary, as we head into July, many of our southern dairy areas are still dry, but that may well not last, and it is not just mud that we have to be aware of as a mastitis risk at calving.

Do your planning, and make sure you have “Plan B” up your sleeve!