When milking became a warzone! 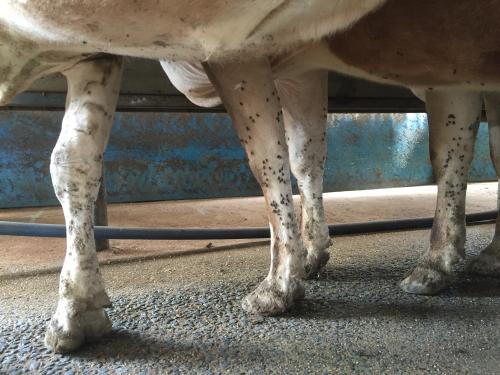 Paul* had made some small but significant changes to both his milking equipment and milking routine after our initial visit had exposed some mastitis risks that he had been unaware of.

A change to a different liner, a small change to system vacuum and a change in the milking routine to ensure that teats were disinfected much sooner after cup removal in his 36-a-side herringbone were the key changes that had been made.

Four weeks after he had made those changes, it was time for a re-assessment to ensure that the changes had actually resulted in a reduced risk of mastitis infections.

Teat end damage had been especially significant, so we were all keen to see the results of teat scoring at this re-assessment.

However, it wasn’t very far into milking when we realised that something was terribly wrong!

The first shed full of cows had been particularly unhappy - cows were swishing their tails, stomping their feet, and multiple sets of cups had been sent flying as cows kicked them off. Getting cups back onto the cows had become a battle of wills and the dairy was rapidly becoming an unhappy place!

We retreated from the pit to observe at a distance for a couple more sheds full of cows, and it was obvious that this milking was becoming more and more like a war zone!

It was a battle to get the cows into the shed, get the cups on and then to keep them on.

What was the cause of the sudden onset of this behaviour? In a word - flies!!!!

The milking staff had noticed over the last few days that flies had started to mildly irritate the cows, but obviously the conditions were just perfect on this evening, and the number of flies had escalated dramatically, to the point that at this milking they were biting and irritating both cows and people in the dairy.

Given that an essential part of the mastitis risk assessment process is to assess and score the teat end condition, handling teats to turn them up and examine the teat end after cups have come off was likely to be a life threatening experience on this occasion!

As the staff were already having a battle just to get through milking, it was deemed to be a prudent decision to call off our assessment for that evening.

Fortunately, when the staff had first reported some irritation from the flies, Paul had purchased his chosen fly treatment product, so that treatment was immediately scheduled for the next day, and our re-assessment was postponed for a week whilst things settled down.

That particular evening milking was a long, slow and painful process, but the fly treatment the next day had a rapid effect, and milking returned to normal over the next couple of days.

This was a very severe episode of fly irritation and the potential effect on milk quality and mastitis risk caused by the disruption to milking routine was obvious, as well as the risk of direct transfer of bacteria from teat to teat by flies in the numbers that were present on that evening.

But what really stood out was the effect on the people in the dairy. Their ability to complete their tasks during milking in any sort of orderly way was severely compromised, and the increased occupational health & safety risks associated with the aberrant cow behaviour was substantial.

Early changes in dairy function and cow behaviour can sometimes be subtle. If staff and management are alert to the early signs of change, acting proactively can often prevent more serious issues developing.

The good news for Paul was that when we returned to conduct the re-assessment of mastitis risk, milking was once again a smooth, orderly process, and the changes he had made to the dairy and milking routine had resulted in a substantial improvement in teat end condition and a significant reduction in mastitis risk in his dairy.

As plans are being made for dealing with the heat of summer, don’t forget to monitor for fly irritation and be prepared to react quickly upon seeing the early signs, before it becomes a real problem.

* Name changed for this article