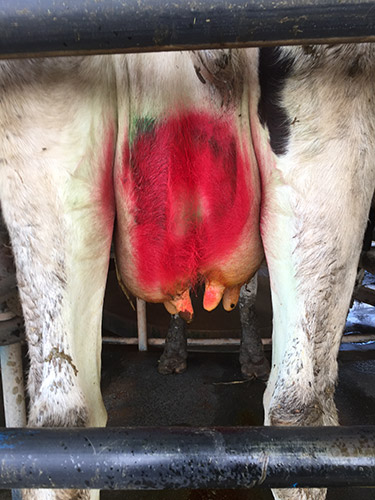 “Something has changed. I just can’t figure it out – it’s not wet, and there is no mud.”

This was Jeff’s first comment when I returned his phone call couple of months ago.

Jeff* and his wife Karen* milk 650 cows through a 60 stand rotary dairy in Northern Victoria.

They had done a lot of work to get their mastitis to where they were now reasonably comfortable – Bulk Milk Cell Count (BMCC) sat between 100,000 and 110,000 cells/ml, and clinical case rates of mastitis were well below the Countdown trigger point of 2 cases per 100 milking cows per month.

It had taken quite some effort for them to get there. In fact, to get the excellent teat end condition that the herd was now enjoying the benefits of, had taken a change of cluster and liners, but the results had been outstanding.

Teat ends now regularly scored at 10 - 12% rough teat ends, well down from the over 30% rough teat ends that were present beforehand, and below the Countdown trigger threshold of 20%.

But the last few months had seen the BMCC rising steadily, and also an increasing number of clinical cases of mastitis.

And Jeff was now frustrated - in fact, very frustrated!

But there was a key message in those first few words on the phone to me – “Something has changed.”

Whenever there is a suggestion that something has changed, one of the first actions generally needed is to get some milk cultures.

Whilst initially Jeff was a bit reluctant, “They always come back as Strep uberis”, he sent off a batch of 6 milk samples from fresh clinical cases a few days later.

When the results came back, there were five useful cultures and one reported as “No Growth”.

Of the five useful samples, three were Staph aureus, and two were Strep uberis.

Jeff and Karen had sent off many batches of milk samples over the last couple of years, and up to this point, Staph aureus had been a very rare result, so this was suggesting that something may have indeed changed!!

The number of samples was still too low to be sure, so Jeff and Karen continued to collect more samples for a little while to be able to confirm the diagnosis.

Staph aureus is a cow-associated mastitis pathogen, meaning that all spread of infection of this bacteria occurs during the milking process - so now I was really interested in the dairy!

We immediately organised a milking time visit and this was just a revelation!

Teat end condition had seriously deteriorated back to 30% rough teat ends, and a very high proportion of cows were failing to milk out properly.

Coupled with these cow risk factors, teat spray coverage was not great, and often there was a long delay between cup removal by the automatic cup removers and the manual application of the teat disinfectant.

We could immediately address the teat disinfection issues with some staff training and a small change to the milking routine, but what was causing the changes to teat condition and milk-out?

The changes we saw are consistent with the vacuum level being higher than optimal for the herd and the system, and sure enough the milking time claw vacuums that we recorded were right at the top end of the desired range.

Perhaps more significantly, we were able to check back on our previous records for the farm, and these claw vacuums were now 0.5 - 1.0 kPa above our previously recorded levels.

A full milking machine test was then organised, and although the plant passed all tests, the vacuum level was lowered by 1.5 kPa.

Teats and teat ends will heal remarkably quickly when the stress that causes damage is removed, and at a re-check four weeks later, teat condition in this herd had returned to the previous level with only 10% rough teat ends, and the clinical case rate had also started to drop.

Over the next month the BMCC dropped by 100,000 cells/ml, and the clinical case rate returned to below the Countdown trigger point.

Firstly, if you think something might have changed, investigate it!

Secondly, all farms should regularly assess and review milking routines to ensure as close as possible to best practice.

Finally, Jeff and Karen’s dairy is a low-line configuration, and these systems are often very sensitive to vacuum levels, because little vacuum is “lost” or “used” to lift milk as happens in both high and mid line systems – it is almost like there is a direct connection to the milkline, with little interference from milk.

We regularly find that subtle changes in vacuum, sometimes as little as 0.5 – 1.0 kPa can make a significant difference - and this effect is even more significant where light weight clusters are being used.

If you think something has changed, there really is no substitute for milking time measures and assessments!

*Names have been changed for this story.