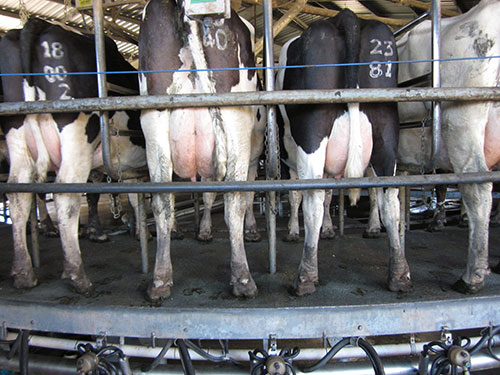 “I don’t know what it is, but something isn’t quite right!”

Tim* milks about 450 cows in a rotary dairy in North East Victoria, and it had been some years since we had worked on mastitis control with him.

“The cell count is still good, but we are now getting too many cases of clinical mastitis, and I reckon the teat ends don’t look as good as they were when you were last here.”

Tim was quite aware of the importance of good teat condition, as during our previous work with the farm, teat end condition had been one of the important risk factors we had identified and worked on (along with improving dry-off & calving management, and a few other aspects of the milking process).

Back at that time, our mastitis risk assessment of the milking process in Tim’s dairy had shown a significant level of teat end damage with 35% of teat ends being classified as either “rough” or “very rough”. Rough and very rough teat ends significantly increase the risk of mastitis infections.

At that time, a small change in the operating vacuum level, plus a change to a different liner had made a huge difference to the level of teat end damage in Tim’s herd, bringing the level of rough and very rough teat ends to below the 20% threshold level recommended by Countdown.

“I’m just not happy with things at the moment, so I think you had better come back and see what is going on.”

A trip up into the beautiful valleys of North East Victoria is always a pleasure, so we gladly undertook that task.

Sure enough, Tim was right - we assessed teat ends in his herd to be back up to around 40% rough and very rough teat ends.

“How can that be – nothing has changed!”

Our assessment of the various factors that can affect teat end condition, including measuring claw vacuum levels and pulsation whilst cows are actually milking, showed that indeed most of these factors hadn’t changed or were actually not likely to be the cause of the current problem with teat end condition.

This left us to zero in on the liners again.

How long since these liners had been changed? Had they needed to “bomb” the plant at all during their life (concentrated chemicals, especially alkalis, can seriously shorten the lifespan of rubber liners)?

The liners were actually getting close to the end of their recommended lifespan of 2500 cow milkings, and Tim had already purchased the next set, so the decision was made to install the new liners, and then re-assess teat condition after 3 - 4 weeks.

Liners don’t suddenly deteriorate at 2500 cow milkings and transition from being perfectly OK one day to absolutely not OK the next day!! They start to progressively deteriorate from the time they are installed (and to a much smaller extent, even before that!), so it was possible that Tim’s current liners had already significantly deteriorated as they approached the 2500 cow milkings.

However, a month later, when we returned for a re-assessment, teat condition was no different.

Something now had to change, so we recommended changing to a different liner which we thought would suit both the dairy setup and Tim’s cows.

A further re-assessment done another month later showed a dramatic improvement – less than 10% of teat ends were now classified as rough or very rough!

How could this be? Has something changed in the design or manufacture of these liners?

Whilst these liners still measure the same in the key elements of their design, and it is possible that there may have been some subtle change in the rubber compounds being used in their manufacture, we saw something else that might better explain the change.

Tim operates the farm with a regular replacement rate of about 25% fresh heifers entering the herd each year.

This means that in the eight years since we first worked with Tim, the herd has significantly changed – few of the original cows remain in the herd, and our assessment of teats was that they are now a subtly different size and shape to what they had been.

In the eight years since we first worked with this herd, the natural changeover of cows means the herd has significantly changed. Few of the original cows remain in the herd, and teats are now a subtly different size and shape to what they had been. Sometimes, things can change!

What is clear now is that the liner Tim had been using for the last eight years no longer suited the teats of the current herd, and a change was necessary.

Just as our own feet change as we grow and age, and we change the size and type of shoes that we wear, so does a herd’s teat profile change as we breed the next generations of our cows.

A very important footnote to this story is that teat condition is not the only factor in Tim’s increased risk of mastitis – as is nearly always the case, there are a number of other factors that Tim will also be working on to regain full control of mastitis and milk quality on his farm.

*Names have been changed for this story.