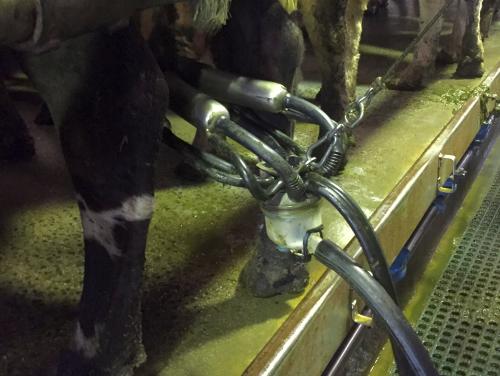 Recent milking time visits to a number of different dairy sheds have reminded me that “normal” means different things to different people.

Cup removal is always an interesting part of the milking routine to observe – in both manual and automatic systems.

ACR’s are a wonderful aid to milking, but because they are “automatic”, when they do something wrong, they “automatically” do it wrong all the time!

On one farm, the force of cup removal was so severe that the noise of the cluster hitting the steelwork was almost deafening in the closed confines of the dairy shed.

Often the cows will be a great indicator of when something is not right, or no longer what they think is “normal”.

The cows in another dairy appeared to be getting agitated close to the point of cup removal, and we observed the ACR’s to be removing cups in a fashion that seemed to drag heavily on the teats.

The cows discomfort was quite obvious to us, and we quickly found that most of the air admission holes were blocked, meaning that cups were being removed whilst still under vacuum.

The other sign of blocked air admission holes is that the claw fills with milk during milking, as the introduction of air is needed to move the milk away from the claw. The full claw bowls in these clusters during milking had also not been noticed.

The reaction of the cows at cups on can also be interesting.

Watching a cups-on person move close to the bridge on a rotary platform, now being in a position before the point at which the feed drop occurs, usually elicits a change in behaviour of the cows because cups will be going on before milk let-down has occurred.

This commonly results in cows being a little more agitated, often shuffling their feet, or even kicking as cups are applied.

My personal experience is of sometimes becoming annoyed at the first couple of cows on the herringbone platform “playing up”, only to realise that it was me who had forgotten to turn the feeders on!

Interestingly, it always took a couple of cows before I recognised that this wasn’t “normal”.

At one dairy, milking staff left the pit after every side of the herringbone finished, to chase the next batch of cows into the dairy.

These staff members considered this to be normal for this dairy, and it certainly appeared that the cows agreed, because they looked to be standing in the yard, just waiting for the “chaser”!

This had become the new “normal”, for both cows and people, which is an interesting concept.

Whilst these are quite dramatic changes, more subtle changes frequently occur.

I was recently reminded of this in our family home when I was asked to move the pile of magazines from the kitchen bench, and my immediate thought response was “What magazines?”

Pondering this a little further, I realised that having left the magazines there for a few days, their presence on the bench had become “normal” for me.

I no longer recognised that their presence on the bench was “abnormal” - in fact, they had become the new normal.

Both people and cows will “normalise” things that we see, hear or do regularly.

Once this has occurred, things are unlikely to change unless someone else recognises and reports the abnormality.

The sooner we recognise this change, and act to address it, the quicker it is to retrain cows. Entrenched behaviour in both cows and people is much more difficult and takes longer to change.

Farmers and their milking staff rarely spend a milking in another dairy, and rarely have someone else observe a milking in their own dairy.

Yet most farms are likely to significantly benefit from a set of outside eyes observing the milking process and routine - this could be another farmer, or could it be an adviser - looking for both obvious and more subtle changes from “normal”.

Countdown trained advisers have a set of tools to assess milking routines in terms of what is normal or abnormal, and also the likely risks to milk quality.

Quite simply, at the end of the day, “normal” is whatever you make it!