It is tiny, but it is important 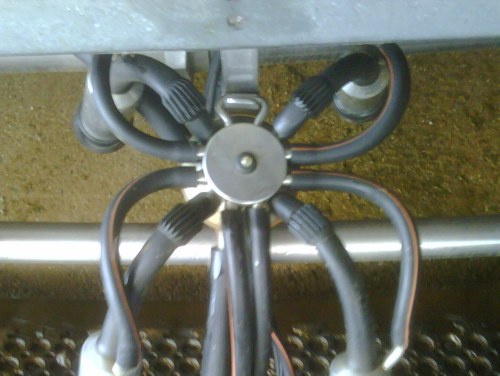 Naturally this tiny part of your plant is the claw air admission hole.

This tiny hole has two key functions in the milking process.

Firstly, the air admission hole allows milk to move away from the claw to the milkline.

Milk, like all liquids, does not run “uphill”. To be able to move upwards in any part of its pathway to the milkline, milk will need to form “slugs” in order to defy gravity, and it needs air to form those slugs.

The air entering the claw through the air admission hole allows those slugs to form and milk can then travel to the milkline.

Hence one of the first signs of a blocked air admission hole is the claw filling with milk as a cow is being milked – because the milk is unable to get away properly.

The second key function of the air admission hole is to allow air to enter the claw at a controlled rate when vacuum is broken at the end of milking to allow cups to be removed.

Otherwise, if there is an effective seal between liners and teats, and no air can enter the claw after vacuum is broken at the end of milking, the cluster will be unable to fall away from the cow, and the only way removal can then occur is by pulling the cups off the cow.

The end result of pulling cups from the cow is to allow blasts of air into the claw as the first cup breaks vacuum away from the teat. This causes “impacts” which are blasts of air and milk which travel into the other three quarters of the cow with a very high risk of transmitting mastitis bacteria.

Hence this tiny air admission hole plays a key role in efficient milking and effective mastitis control, so it is very important to ensure these holes are kept clean.

The signs of a blocked air admission hole are twofold as described above – the claw bowl filling with milk during milking, and the cluster failing to fall away from the cow after vacuum is broken at the end of milking.

All milkers should be trained to be on the lookout for these clues to a blocked air admission hole.

The air admission hole is commonly blocked by dirt, bits of grass or manure, and in summer it is also quite common for flies to get stuck in the hole. Naturally these foreign bodies are to some extent assisted to block the hole by the air movement into the hole and hence it is not uncommon to see a fly “stuck” in the air admission hole.

How commonly blockages of the air admission hole occur can vary dramatically from farm to farm.
Some farms hardly ever see the hole blocked whilst some other farms need to have a milking protocol where the cups on operator actually wipes the hole clean prior to the application of the cups to every cow.

Every farm should ensure that all milkers are aware of the location of the air admission hole, the signs when the hole is blocked, and the importance of clearing those blockages.

In addition, a routine of cleaning the air admission hole on a regular basis using an appropriately sized probe to ensure there is no build up in the aperture of the hole should be standard on every farm.

Ensure that you check with your milking machine tech that you have the correct sized probe, as unnecessarily enlarging the air admission hole can sometimes have unintended consequences!