What is the price of risk? 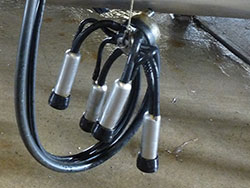 Recently, I dropped one of the family cars into the service centre in the morning for what I expected to be a normal routine service.

It was a big surprise a couple of hours later to sit listening on one end of the phone as the mechanic ran through a list of items on the car that needed attention.

But my mood seriously worsened when he told me the total estimated cost!

I certainly had not budgeted on spending this much on what is now an older car, especially when I had been expecting just the normal service charge!

So the discussion quickly shifted to how we could reduce this cost but still manage the car appropriately.

The major item on the safety list was the tyres, which were due for replacement. Tyres are the only part of the car which contacts the road, and driving on worn or bald tyres results in a risk of an accident that I was not prepared to compromise on.

Routine oil change and lubrication was another item considered too important to miss out on, as it would leave a risk of more catastrophic damage.

However, I deemed a couple of items which posed no real risk as non-essential – a prime example was the Bluetooth phone connection which had decided to “give up” – and I elected not to have those items serviced.

The end result was to save a reasonable amount of money with a minimum of risk, and no compromise on family safety.

How can farms minimise costs in these difficult times, but not significantly escalate the risk of a mastitis or milk quality “blow out”?

This question immediately sprang to mind last week when I heard the comment, “The liners will have to do 12 months this year!”

You can either calculate this yourself, or you could use the Liner Life Calculator tool in the Countdown Mastitis Toolkit app (available free for both iOS and Android smartphones) to help calculate the correct liner change date, and also to send you a reminder when that time arrives.

Like all rubber products, as they wear out they progressively lose tension and resilience. They can no longer apply the same forces and massage to teats as they did when new, resulting in a degradation of milking performance and a far higher risk of teat end damage.

Once teat ends are damaged, even if only to a mild degree, the risk of mastitis causing bacteria being able to survive near the teat end and to be able to enter the teat canal significantly increases.

And so often, once the horse has bolted, it can be a difficult process to rein it back in.

If you are looking to minimise the cost of milking machine servicing and maintenance, have a discussion with your milking machine technician about whether there are any options that won’t increase your risk of a milk quality or mastitis “accident”.

For example, you could probably milk without a Bluetooth phone connection, but at the very least, don’t drive on bald tyres by not changing the liners – it could be a saving that comes at a very high price!