When frustration sets in! 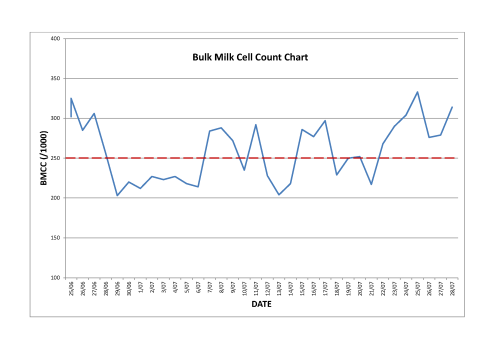 “I culled the 10 highest cell count cows and the cell count didn’t change – not at all!”

He milks about 300 cows in Northern Victoria with a spring/autumn split calving system, and I could hear the frustration in his voice.

Leon supplies a processor where the premium payment threshold for Bulk Milk Cell Count (BMCC) is 250,000 cells/ml. The farm has been constantly in and out of premium band for a couple of years now, and nothing he has done has solved the problem.

In the last month, the average BMCC was just over 250,000 and a chart of Leon’s BMCC for that last month is pretty typical of what has been happening throughout the last couple of years.

As Leon said, “I can’t just keep culling cows if it isn’t going to make a difference.”

This is a story we regularly hear – farms either culling or withholding high cell count cows from the vat, and the BMCC doesn’t seem to change.

There are a number of reasons why this might occur, but three factors are likely to be very significant.

Firstly, a cow’s Individual Cow Cell Count (ICCC) is not a static number – a cow’s ICCC can change from day to day, and even from hour to hour.

A cow that has herd tested yesterday may have a similar ICCC today, or could have a quite different ICCC today simply as a result of both natural biological variation and the cow’s immune system responding to the varying levels of challenge in the udder.

If enough cows change their ICCC, then the overall BMCC will change as a result.

A cow’s contribution to the BMCC is a function of both her current ICCC and also the volume of milk she is contributing to the vat.

Analysis of Leon’s last herd test showed that about 15% of his herd had exceeded the level of contribution which we consider to be significant, and combined with the pattern of contribution, it showed that in Leon’s herd, there is a larger number of cows with a moderately high ICCC rather than a small number of cows with a very high ICCC creating the problem.

Interestingly, one of Leon’s cows with an ICCC over 1,000,000 cells/ml did not even make the list of significant contributors, simply because her production was quite a bit lower than other cows. Hence, culling or withholding this cow (and other cows like her) is unlikely to make a significant difference to the BMCC.

The third likely factor is that mastitis infections in a herd are a dynamic and fluid situation, constantly changing.

It is the rate at which these changes are occurring which can cause significant changes in which cows are contributing most to the BMCC at any given time, and if this rate of dynamic change is high, then culling or withholding cows from the vat may seem to have little or no effect, simply because other cows have become infected over that time and have become significant contributors to the BMCC.

So where does this leave Leon?

Probably the most likely outcome is that both conditions are occurring.

Either way, the key to interpreting and understanding this analysis will be milk cultures.

Culture results will guide the further investigation of the problem, the aim of which will be to identify the source of infections, the method of spread, and how to prevent spread. The cultures will also help us understand the likelihood of being able to cure existing infections.

Leon’s next task will be to carefully collect a set of about 25 milk samples from selected cows immediately after his next herd test.

As happens most of the time, a bit of background analysis and a good set of milk cultures prior to launching into a detailed investigation are likely to result in a higher quality investigation and a better outcome for Leon.

* Leon’s name has been changed for this article.

Could a Dairy Focus Cell Count Contributors Table help you understand what is happening in your herd? Call the office for more information.