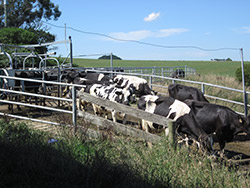 The last significant in-season drop in the price of milk to suppliers was in 2008, and that doesn’t take a long memory to recall – it is hardly ancient history!

The price drop in 2008 triggered a range of responses, some of which produced significant lessons which shouldn’t be forgotten.

In terms of milk quality and mastitis control there are three lessons that should probably be recalled now to avoid history repeating itself.

Many farms which made radical changes to their dry-off routine (mainly in terms of product selection & cow selection) suffered a significant “blow out” in terms of cell counts and cases of mastitis in the following lactation, resulting in costs that were way in excess of the saving made at dry-off.

Many of these farms also had significant longer term effects on their milk quality and mastitis control.

This does not mean it is not possible to cut some costs at dry-off, but the lesson from 2008 is that understanding what effect each compromise has on the risk of mastitis will allow an informed decision to be made, and also give an opportunity to potentially alter other management areas to reduce that risk.

Also consider that whilst every compromise has an effect, some changes have a lesser risk than others, and some changes may have “work-arounds” that will help to manage the change in risk.

If you think you need to make compromises at dry-off, make sure you have a discussion with your advisers about how to minimise the risks, and how to best manage the changes in risk that are likely to result.

As an example, if you were considering removing teat sealant from your dry-off treatment protocol, the main effect will be to increase the risk of new infections, especially around calving.

After discussion, you may decide that the increased risk is a risk you do not want to take at all, or you may choose to limit the risk to a certain group of animals (e.g. the heifers), or you may choose to consider a “work-around” in terms of altering your calving management for either the whole herd, or that particular group of animals, in a way that reduces that risk at calving.

Also, if you are considering selective treatment of cows, don’t be surprised if your adviser suggests a different cell count threshold for treatment than you might have expected.

Already many herd managers are talking of reduced numbers for next season.

Selection of cows to cull is always based on many factors, but cell counts and mastitis are always in the mix to be considered.

Countdown has given us good guidelines to use when considering cows for culling.

Firstly, cows that have had three or more clinical cases of mastitis in a lactation should appear on most preferential culling lists.

However, the use of cell counts for culling requires a bit more thought, as just culling the cows with the highest cell counts at the most recent herd test may not give the best outcome.

A number of factors including a cow’s age, production, udder conformation and history of dry cow therapy and clinical cases should also be taken into account.

As an example, an older cow with a history of high cell counts after having being treated with dry cow therapy should generally be higher on the preferential cull list than a young cow that has never had dry cow therapy, even though the younger cow’s cell count may be considerably higher.

This is because the cow that has never had dry cow therapy is likely to have a greater chance of cure with that therapy than a cow that has already failed to cure before.

It is likely that taking a little time to work through your cull list will give you a better outcome.

Another lesson from 2008 is that some farms that chose to reduce costs and gain extra cash by selling replacement heifers subsequently found it to be a long hard road to rebuild the herd at a later date.

Not only that, but their ability to cull cows for any reason was also severely compromised for some years afterwards.

In summary, some hard decisions are likely to be needed. Also, there is no single answer to any of these situations or questions, and every farm is different.

However, it is almost certain that an informed decision with some forward planning to cover any changes in the farm’s milk quality and mastitis risk profile is likely to give a far better outcome.

History has given us some lessons to learn from, and now is the time to heed those lessons.