A plan plus attention to detail makes a difference

Craig Gallpen decided that it was time to do something about the hassle and cost of dealing with mastitis in their 450 cow herd that milks three-times-a-day in the Riverina. 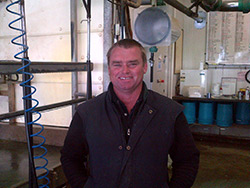 Craig was not only disappointed with the cost of treating clinical cases, but culling due to mastitis was affecting their ability to achieve and maintain herd numbers.

We started by getting milk cultures from high cell count cows and clinical cases. These showed a mixed bag of contagious and environmental bacteria (especially Strep uberis and E. coli).

The next step was to conduct a Dairy Focus Mastitis Risk Assessment of the dairy. This is an assessment of every part of the milking process that can influence the risk of mastitis - including the cows, the people & the machines. 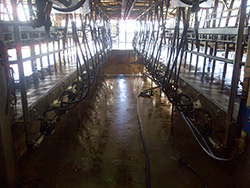 The Gallpen dairy scored an Overall Mastitis Risk Score of 31 points out of 60 at this initial visit, meaning that the dairy and milking process rated as “High Risk” for the spread of mastitis.

This became the start of a process to reduce the risk of mastitis not just in the dairy, but across all five areas mentioned above.

Working with Craig and herd manager, Rachael Napier, a comprehensive plan was developed to cover all these areas, with a particular emphasis on staff education and training.

Improved milking protocols, including the use of milking gloves and strict attention to best possible coverage of teats with teat spray were key factors in reducing the risk of spread in the dairy.

The introduction of a “wash & dry” policy for teats prior to milking during times of high environmental risk of mastitis was a cornerstone of this culture, and drastically reduced the effect of wet and muddy weather.

“We created a culture in the dairy of how things are done”, said Craig.

Poor teat end condition was also a critical mastitis risk factor - this required a change of shells and liners to get the teat ends to a satisfactory condition.

Attention to detail in the treatment of clinical cases gave Rachael the control she needed for more successful outcomes.

"Our mastitis plan has been the ultimate for me. I would hate to go back to where we were." - Craig Gallpen, Deniliquin

A Dairy Focus Drying-Off Strategy discussion led to strict drying-off and dry-off treatment protocols including the use of Teatseal, and a Dairy Focus Calving Strategy was developed to reduce the risk of Strep uberis infections at calving.

These policies were implemented, and are now regularly reviewed each year to ensure they remain current.

Experience has shown that mastitis problems do not develop overnight and neither are they resolved overnight – it takes time, but attention to detail is always rewarded.

In fact, it took the Gallpen farm 12 months before cell counts were consistently below 100,000.

Their most recent Overall Mastitis Risk Score in the dairy was 8 points out of 60 - well into the "Low Risk" category for mastitis - and clinical cases are now at their lowest level ever.

“Our mastitis plan was the ultimate for me”, said Craig, “I would hate to go back to where we were.”

“People ask me what we did, and I just think they haven’t realised it isn’t one thing, and that they have a whole process in front of them.”

But it was Rachael who best summed up the current situation, “We have a pretty good system now.”