More trouble - but is it new, or old trouble? 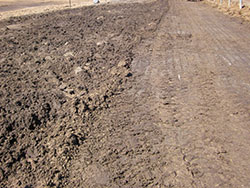 I should have been expecting the phone to drop out, but it still came as a surprise when it did!

It drops out every time we approach Cape Clear, a small community midway between Ballarat and Lismore in the Western District.

Unfortunately, I was mid-sentence on the phone to Paul when it happened.

You may remember Paul from a couple of months ago – his was the large farm where Staph aureus (Staph) had been causing cell count and mastitis issues.

Paul and the farm staff had diligently made the necessary changes to their plan, especially to the milking plant and the milking routine, and things had been going along quite well, but they were also well aware that things could change!

Paul had seen how milk cultures are so important to understanding a problem, and was aware that we needed ongoing cultures to monitor what was happening on the farm, so when the Bulk Milk Cell Count (BMCC) started to sneak up, and he also started to have a run of clinical cases of mastitis, he had duly collected a range of milk samples for culturing.

The results had just come back, and he had called to discuss the implications when the phone dropped out!

While we travelled onward to where we would regain signal, I had time to read the email with the results that he had sent, and sure enough, it looked like things had changed, as there were a number of Strep uberis results in this batch.

But the critical question was about which samples came from high cell count cows, and which were from clinical cases?

After we regained contact, I asked Paul to send me the list of cows with a note as to which were clinical cases and which were not. I was then able to sit in the car with my iPad on one knee and iPhone on the other knee, comparing the cow list with the culture results (and no, I was NOT driving at the same time!).

This change necessitated a change of thinking – where could these environmental Strep uberis infections be coming from?

As always, the highest risk period for new infections, especially environmental infections, is the first hour after milking, whilst teat orifices are still closing and sealing.

This meant the feed pad was high on the list of potential offenders, because that is where the cows go immediately after leaving the milking shed.

“How often is the feed pad cleaned?” was naturally the first question, and the discussion went from there.

Like many farms, Paul’s feed pad is cleaned on an “as needs” basis – when it looks like it is “too dirty”, it goes onto the job list to be cleaned.

This then opens the door of human variability – different people may have a different interpretation of what is “too dirty”, and also how “urgent” the task is, and possibly even “how it is done”!

A delay of only a day or so, or a different idea of what is “too dirty”, can easily open a window of considerable risk for environmental infections.

So the decision was made to change to a regular cleaning program – every Monday and Thursday, because that is when all staff members are on the farm, making it more “do-able” on those days.

Extra cleaning would be done in anticipation of a rain event, as it usually becomes very difficult to clean a pad after it turns to slop!

The second question regarding the feed pad is whether or not feed is in the troughs prior to milking so that cows will walk out after being milked and start eating.

If there is no feed in the troughs when they arrive, the cows will always do the same thing – lie down and wait!

And the last thing Paul needs is for the cows to lie down and expose their teats to contaminated material in that first hour after milking!

In Paul’s case, this was not an issue, but we regularly see farms where a simple change to this timing can make a significant difference to the risk of environmental infections.

While Paul’s milk quality was quickly back on track after these changes, I contemplated how useful technology had been in providing a rapid response – and also how frustrated I had been by a momentary loss of that technology near Cape Clear!

But I also considered how valuable the communication had been for Paul that comes from maintaining a close relationship with an advisor.

Paul was able to make a quick response using informed decisions, based on discussing accurate information coupled with a clear, up-to-date understanding of the on-farm situation.

Use whatever technology you have available to keep your advisers informed to make the best use of their services.