Must we accept more mastitis in wet weather? 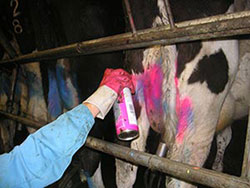 Some of our dairy regions have experienced a wet winter for the first time in a number of years, and many farms have found it a test of their patience as well as a test of their infrastructure and systems.

One of the issues associated with the wet weather has been an increase in milk quality problems in terms of both mastitis and Bactoscan results on some farms.

As the spring calving winds down, it is an ideal opportunity for each farm to consider that calving period in terms of milk quality outcomes.

How many cases of mastitis occurred during that calving period? How many is too many?

As usual, the Countdown Farm Guidelines give us a good trigger point to work with -

Given that this trigger point indicates a “significant problem”, then farms should usually be aiming to be well below this point.

“But you have to expect more mastitis in wet conditions” is a common response, but in fact, the Countdown guideline does not give a different trigger point for wet weather.

If your herd exceeded the trigger point for mastitis at calving, now is a very good time to reflect on that calving period while it is still fresh in your mind to establish if there is something that might have reduced the risk of that happening.

If you were “expecting” more mastitis due to the likelihood of wet conditions, are there things that could have been done to reduce the risk so that you didn’t have to “accept” more mastitis in those conditions?

A useful analogy might be to consider driving a car in wet weather.

Generally we modify our driving in wet weather to reduce the risk. For example, we might activate the windscreen wipers, slow down, and allow a greater braking distance.

But there are also things that we could have done before the wet weather. We might have replaced the worn windscreen wiper blades, checked that the tyres had adequate tread on them for wet conditions, and made sure there was water and detergent in the windscreen washers.

A good way to think of the recent calving period is in terms of three phases for the calving cows – firstly, the springing cows leading up to calving, secondly, the actual calving event and introduction of the calved cows into the milking shed, and thirdly, the management of the fresh cows for the first 14 days after calving.

Given that most of the mastitis in this calving period is likely to have been environmentally sourced (it is best to have some milk cultures to confirm this), perhaps firstly consider factors that reduce the level of contamination of teats with mud and faeces – for example, were there enough areas available for calving cows to move onto after the existing area had pugged up? If you had a calving pad, did that become excessively contaminated?

Then think of factors that keep the teat canal sealed until the point of calving – were cows dripping milk prior to calving? Was udder oedema (“flag”) a problem in heifers and/or cows?

Consider the strategies for calving & calved cows - were freshly calved cows brought into the dairy as soon as possible? Did you have a wash & dry strategy for teats on these fresh cows during the wet weather?

Finally, think about the colostrum cows – were they managed as a separate herd? If so, were they kept in clean areas, or exposed to heavily contaminated areas? Were all cows being checked each milking to detect and treat clinical cases as early as possible?

It is beyond the scope of this article to consider every possible risk factor for mastitis at calving during wet weather, but reflecting on the recent calving period is best done as soon as possible.

Mastitis risk factors are best assessed and reviewed whilst still being reasonably representative of what they were during that period – paddocks, lanes and pads will look very different in a month or two!

If your farm reached or exceeded the Countdown trigger point during this recent spring calving, then the best outcome of this reflection would be a strategy for future calving periods that ensures that if you “expect” wet conditions, you don’t have to “accept” more mastitis.