Will "it" happen to you this mating season? 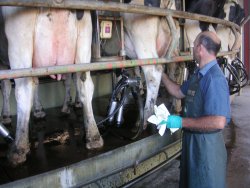 Actually, “it” has happened each year for a number of years.

So “it” will probably happen again this year!

Each year we see a number of farms where a mating synchrony program has been accompanied by an outbreak of clinical mastitis – either during the mating program, or immediately after.

Milk cultures from these herds nearly always show environmental bacteria to be the cause.

It seems that large groups of cows milling around when on heat significantly increases the risk of environmental mastitis, especially mastitis caused by Strep uberis.

And it's not hard to understand why!

Most of this mastitis results from exposure of teats to contamination containing these environmental bacteria.

Whilst there are plenty of obvious sources of environmental bacteria on a dairy farm, it seems these groups of highly active cows are often able to create their own pool of "muck" to slop around in!

To reduce this risk, plan ahead and avoid paddocks with low or wet areas.

Watch out for leaking water troughs, and take particularly care with shade areas. Commonly shade areas under trees are already heavily contaminated areas. These areas should be used judiciously at any time, but be especially careful when you have a group of highly active cows!

Even consider moving highly active mating groups of cows during the day if they start to create high risk "muck holes" in a grazing area.

Not only does mud and faecal contamination greatly increase the number of bacteria on the teat skin, it can also lead to drying and cracking of teat skin, providing a great environment for bacteria to survive & multiply. Dry, “caked on” mud is also likely to compromise your teat disinfection.

Whether wet or dry, this muck on teats can also significantly alter the dynamics of milking, potentially leading to more cup slip and cup crawl – both are significant mastitis risks.

Whilst preventing extra contamination of teats is clearly the first option to reduce the risk of a mastitis outbreak, the next step to consider is your pre-milking teat preparation during this period.

A pre-milking wash and dry program for teats in this group of cows can be used for these periods, either as a preventative measure, or as part of your initial response to a mastitis outbreak. The addition of pre-milking teat disinfection may also be appropriate for some herds.

Finally, monitor cell counts closely and ensure there is a regular process for early detection of any clinical cases – the earlier you treat, the better the success rate, and the lower the chance of further spread!

In summary, a little pro-active thought and planning may help you to avoid the pain of an unwanted and expensive mastitis outbreak.

For assistance with a strategy and a "go-to" plan, call the Dairy Focus Office now.