Make the most of your investment! 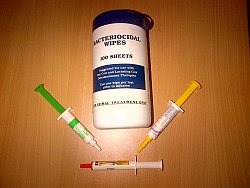 “We draft them off as we milk, then when we’ve finished milking the rest, we just bring them back on the platform and dry cow them.”

Wait a moment – did I hear that correctly? If so, you better stop right now and think about that!!

Dry cow therapy is a significant investment of time and money. “The way I’ve always done it” may no longer be best practice or give you the best return on that investment.

The goals at drying-off are firstly to shut down milk production and seal the teat canal as quickly as possible, and secondly, to use a treatment program that both treats existing infections and reduces the risk of new infections in both the dry period and at calving.

Here are some of the key steps to review and consider in your dry-off protocol.

Production level at the point of dry-off

This is a summary of some key points for review and discussion that could be used as a starting point to ensure you have an effective drying-off treatment protocol on your farm.

The Countdown Farm Guidelines (specifically Guidelines 16, 17 & 18) provide a wealth of information and are a great way to guide a discussion with your veterinarian.

Drying-off is your investment in the next lactation – make the most of it!